The Hospitality of New Zealanders

We were in Christchurch for a bit more than 36 hours and managed to fit in four epic meals and a final walk on the beach. All three of us thought this would be a grand way to spend our last unfrozen afternoon and indeed the walk boded extremely well for the working dynamic of our film crew. We were content and comfortable to walk together, alone, forge off ahead, stop to watch a bird or paddle in the surf, wait for the others, or not wait, and all with no apparent or invented pressure to converse but rather each speaking up with a relaxed ease only when there was something work remarking on. Rushing off to film far corners of the globe has it rewards and its pitfalls, and one of the deepest of the latter is to end up in some god-forsaken hellhole with unpleasant or uptight company. Although Anne and I have now worked together many times in Rwanda I had only met Sylvestre a few times, but our blissful afternoon of tramping on the beach made me very confident that we won't all drive one another mad in four snowbound months together. It was a perfect blend of independence, tolerance, and unity. 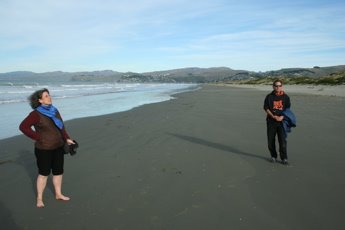 After several miles on the beach itself we approached the tip of a peninsula, but despite our hopes that some enterprising New Zealander might have erected a wine bar overlooking the channel we found nothing there but scrub and sand and a few oceanic pines. To a couple out walking two miniscule dogs we expressed our desire to have a glass of wine. She had recently moved back to New Zealand from London and He was from Wales. "I came with her to visit for a bit while she settled in, then I went back, sold the lot and joined her three months later," he told us. They walked with us for quite a while and escorted us to the bus-stop, told the driver where to drop us and apologized profusely for being unable to invite us to their friends' home, the owner of one of the dogs, who they said was probably already going at the wine while they were out doing the hard work. By the time we parted ways they virtually demanded that on our way out of the Antarctic we get in touch and "come 'round for drinks."
Descending from the bus we found the local pub a bit too local and the ashtrays a bit to full and concluded it wasn't really quite on, so we walked on along a boardwalk path through a marshy nature reserve bordering the bay, photographing sunsets and pine trees, until darkness overtook us as we emerged onto a road. Anne's attempt to explain to a taxi company, by cell phone, that we were standing in the dark beside Bridge St., near a causeway and a forest, but that we had no physical address, was met with a rather tepid response from the dispatcher. 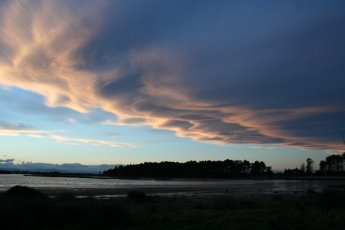 "Should we try to hitch?" she asked us, and then turned towards the roadway to gesture at the oncoming traffic in a most ambivalent way, with upturned hands and a sort of side-to-side swaying motion. Immediately a station wagon pulled to halt some 50 meters up. The reverse lights went on. Then the car made a U-turn. "Is everything alright?" asked the driver. "We're just looking for a ride," I said. "Oh, well. Get in then. In this country, you know, one puts one's thumb in the air. I wasn't sure really what you were trying to say there." Anne, of course, has spent much of her time lately in Rwanda, where the approved method of soliciting transport is to appeal to the passing driver with palms facing upwards, either to show the lack of a weapon or the non-presence of funds, in supplication, or something else altogether.
Lara Koodiaroff, our savior, then insisted on driving us wherever it was we wanted to go. She is an aromatherapy consultant from Canberra who came to New Zealand a few years ago on holiday and then "went back to Australia, sold the lot and moved here; it's a complete lifestyle change." We said all we really wanted was a nice glass of wine and although she was late to dinner she took us miles out of her way to Littleton, called her dinner companion and said she was running late, and had a glass with us. She has since emailed offering to put together a care package of dark chocolate and fine aromas to send down to us.

Hey you guys! How are you going?
Ready for that care package yet?
Lara*

I would love a care package from you and I want to know where I can send you one!

Your hitchhiking buddy from way back,

P:S: if anyone could forward this message to Lara I would be really greatful!