Who do I ask if I want to put up a poster in my dorm?

It already seems a long time ago that we landed ten miles out on the sea ice in that enormous C17, stomping down the stairs in our zipped up snorkle parkas into the white world. Like many remote outposts McMurdo station has a rigid culture and an established routine that imposes itself upon you, rather than presenting surroundings that adapt to your presence. Everyone is incredibly helpful, and in every one of the many briefings we have had we are told not to hesitate to ask for help and assistance of any kind, but all these offers are made within the rigorous constraints of the power point demonstration you have just seen and the bullet points you have just been shot with and I can't help having the feeling that to request doing anything remotely out of the ordinary would be most unsettling. It is a bizarre corporate structure. I have of course filmed within corporate structures before, but I've never really been on the inside of one as someone whose health, safety and well-being is presumed to be part of the raison d'etre of the entity. This is an environment with real potential for danger, but the obsession with personal safety rivals or perhaps even exceeds the kinds of measures I saw at Kandahar Air Field in southern Afghanistan in May, and those folks have to worry about suicide bombers, AK-47s and Rocket attacks.

I've already made enough bad jokes about briefings but I did promise to update you on the "push-pin" briefing, which was both hilarious and gives an idea of the long corporate fingers that reach down here and poke their way into every corner of the base. All the way back in Christchurch we were briefed at the CDC (the clothing distribution center) by a jovial Kiwi who explained to us what kit we were to be issued, how to go about changing out bits of it if it was unsatisfactory, which bits we were required to wear on the flight down and so forth (in case you crash on the ice somewhere it is advisable to have a pretty hard-core complement of ECW gear with you so you don't freeze to death during the search and rescue). Gels and Liquids would be allowed on board, but any sharp objects would need to be checked. At last he said, barely containing his quite obvious mirth, "this year we have something new for you. You are each being issued with a box of one hundred push-pins." Take good care of them, he suggested, because when you get back they "will probably make us take them off you." Someone, somewhere had decided that unnecessary damage was being done to the dormitory walls at McMurdo, by residents attaching their posters and artwork to the walls with nails presumably pilfered from the construction department. Thus the prophylactic solution of a push-pin ration to go with the Canada Goose three quarter length parkas and Thinsulate lined deerskin mittens. "If both roommates have some," he continued with a chuckle, "one of you will probably have to turn yours in." When the official assigned to brief and carry out such a new and exciting proposal can't avoid making fun of it I feel confident in labeling it a deeply flawed policy.

My point is not to trash the good intentions of those whose mandate is to protect facilities and human lives (although obviously I'll do that in a heartbeat if it is good for half a laugh) but rather to try and capture the strange culture here, rooted in the conflict between living on the edge of wildness at the gateway to the coldest and most remote continent on earth, on the exact site that was the base for some of the most daring and rugged polar exploration in history, and the sense that, if not big brother, big grandma is looming constantly over you making sure you wear your long johns and don't forget to brush your teeth. 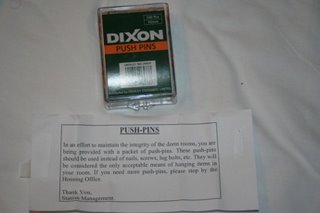 What it says on the paper that came taped around the box is:

"In an effort to maintain the integrity of the dorm rooms, you are being issued with a packet of push-pins. These push-pins should be used instead of nails, screws, lug bolts, etc. They will be considered the only acceptable means of hanging items in your room. If you need more push-pins, please stop by the Housing Office."

So very happy to see that things haven't changed a bit down there. Are they still calling ice, "safety water"? Don't slip.