I'm not sure where Fridtjof Nansen sourced his bamboo, but he had the foresight to bring enough with him on the Fram journey to build his kayaks out of. This suggests that he might have hatched in advance of even setting sail his insane plan to abandon the ice-bound Fram and forge over the sea ice to the North Pole by dog-sled (here the kayak frames are piled up on a sledge). Did he know all along? The upper kayak frame is a one-man boat, the other is for two people. 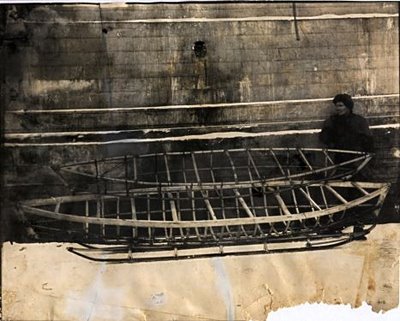 A staggeringly cool dude named Craig whose website I have nosed around in for years and who is into bamboo and kayaks and more lays it all out for you in case you want to try building your own. I made a small one once and floated in a tiny pond in Puerto Rico but it was nothing I'd go to the Arctic in. I bequeathed it to Alex "el jibaro de la bachata" but sadly tree-rats moved in to his garage in El Alto de la Bandera and turned it into a nest before he had a chance to launch it.

"tree rats"??, were these flying tree rats or just normal tree rats? Keep it all coming, I'm with you. I'll send David down if you find any penguins.