No termite damage to be found... 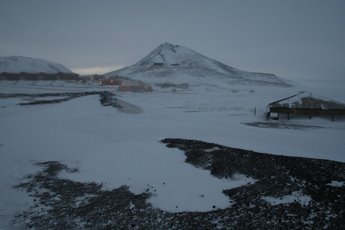 Hut Point hut, McMurdo Station in the background across the "lake."

Sunday morning is sleepy time around McMurdo, an already sleepy place. The wind came up overnight and by 10AM it was rather unpleasant outside, with runnels of blowing snow ripping and coursing over the ground outside. While the rest of the station slept in we bundled up in full on sub-sub-zero battle gear, did the daily vehicle fluids checklist and drove down to Hut Point, a few hundred meters below today's McMurdo Station. Hut Point is the location of Scott's Hut from the Discovery expedition, and it hasn't aged a day since it was built. Still piled up outside are some frozen seal carcasses, whether from that expedition or slightly later ones I suspect nobody living knows for sure. We were able to hide from the vicious wind on the lee side of the building, where we filmed some spectacular landscapes.

There was not much sound to be had except for the wind ripping at the bamboo flags out on the sea ice and the distant hum of McMurdo's power station. Still, only a few hundred yards from the collection of quonset huts and prefab dorms that is McMurdo we were already far enough to get a feeling of being lost in an immensity of blue and white, ice and sky indecipherably blending together at the horizon. 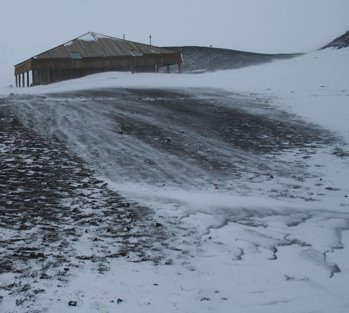 The hut at Hut Point. What looks like rivulets of milk coursing down the scree in front of the hut is snow blowing up the hill.