Is Anybody out There? 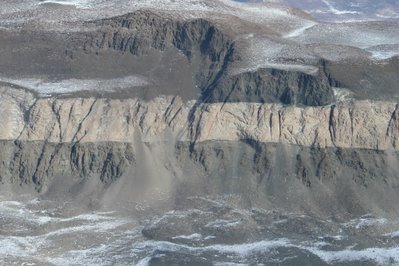 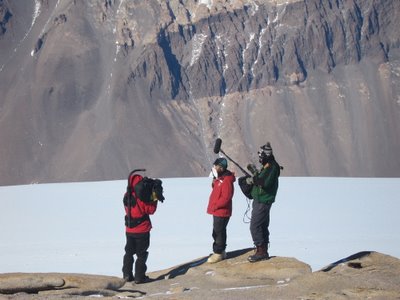 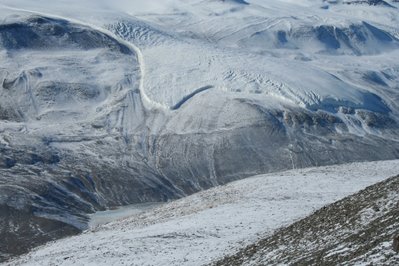 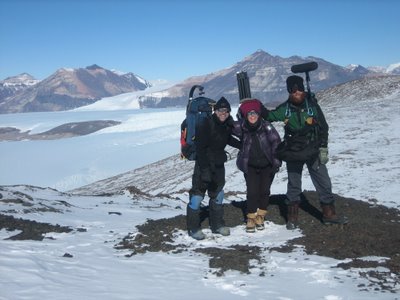 Somewhere around the middle of November
Dear Deany,

We've been just over a week here at Friis Hills and are rapidly approaching the halfway mark of the camping in the wilderness portion of our Antarctic experience. We're going on another helicopter flight today to get aerial footage of our setup here on this little mesa, but I won't be able to get those photographs out yet since I hope this missive will be reaching you on that very same helo.

I've been managing some sort of breath-taking hike almost every day here; since the sun no longer goes down at all we film for a full day and there is still time and light left over to walk out to the edge of the polar ice sheet or climb one of the low dolorite hills that surround the rocky plain we are camped on. Two days ago all seven of us, the four geologists and three filmmakers, hiked out together to the easternmost lobe of our "island." It was quite an ordeal carrying video camera, tripod and sound gear for what must have been a good five miles over rocks and snow. The photo of us grinning like monkeys with all our gear weighing us down is, trust me, from a very early stage of the excursion. From time to time we went ahead of the geologists, set up, and then filmed them in the distance, approaching us, passing us, forgetting to wait for us while we madly packed the stuff back up and ran to catch them, and so on. They ate lunch overlooking Stocking Glacier, at the foot of which two other geologists are camped investigating some muddy lobes that droop down towards the sea ice. Adam Lewis spoke to these two at length on the radio and we spent a good half an hour trying to locate them visually, for no particular good reason. Nobody had brought binoculars along and so we set up the camera with the telephoto lens and tried to spy their Endurance tent against the brown hillside below, but without success. Alan Ashworth and Adam had camped together with one of the two the year before, but there was nothing to be gained from seeing their camp at such a distance, so the whole episode was rather bizarre. It demonstrated, I thought, humanity's desperate and primal urge to be social, the seven of us peering far off into the distant valley below from atop a granite boulder, offering one another hints and suggestions and interpretations of the directions we were receiving via radio, all in the futile attempt to see a tent exactly like our own, a faraway colored smudge that would offer proof that we are not, in fact, the last seven remaining souls on earth, that there are still others out there. In one of the photos I've included here you can see Sylvestre and I double-teaming Adam Lewis and attempting to paparazzi him to death as he talks to the mythical other camp on the radio. He resisted our attempts to terrorize him into falling over the edge onto the glacier and invited the invisible geologist duo down in the valley to hike up and join us for Thanksgiving, which should be coming up fairly soon. I don't have much more of a sense of time and day and date at this point than to be able to tell you that it is somewhere around the middle of November....

From our granite outcropping we had a phenomenal view of Erebus, which says something about how clear the air is, since the summit must be close to one hundred miles away. I regret to inform you that Alan and Adam pondered the questions "what would happen if Erebus erupted and wiped out everyone in McMurdo?" And: "how long would it take someone to come and get us off of here if that happened?"

Hoping you pull through the eruption,
Rich

We give our bests to all of you! (Say hi to Adam Lewis--- the office is pretty quiet without him--- especially now that Joel and Becki have left for the Dry Valleys). No one is jumping to touch the ceiling anymore. We're starting to work quietly... like the still warmth before the katabatics.

Also, your pictures are amazing! Can't wait for the film! (or better yet, more field work)

Amazing pictures, I imagine that the south or north pole of Mars must look something like that, I will keep an eye on your expedition from the relative warmth of a Canadian winter.

Your blog is awesome! Of course, I'm reading it 2 years later. But I love it...thank you!