A Weekend with the Locavorians 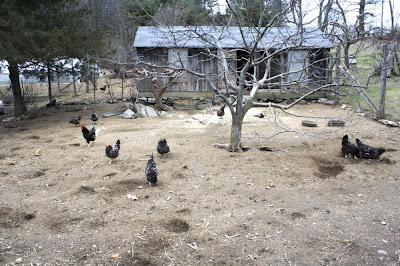 Touring about the idyllic Berkshires in southwest Massachusetts, especially in the company of Alejandro DeOnis, one quickly comes to the conclusion that the movement we've all been hearing so much about, based in part on the prolific writings of Wendell Berry,

and involving a mixture of getting back to the land and consuming locally, is starting to have the traction of a good four-wheel-drive pickup truck. I've always thought of the Berkshires as a summer playground for affluent urban summer weekenders, but a recent visit focussed on what the permanent residents of these soft, rolling mountains are up to gave a quite different impression. 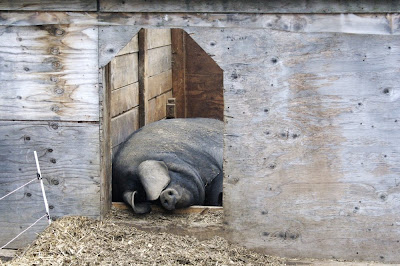 Nestled between the palatial vacation estates and the old-money getaways are numerous farms where patches of mature, diverse forest butt up against open rolling pasture and temporarily fenced fields. Here chickens, guinea hens, pigs, goats and cattle take turns munching and manuring, enriching soils that later this spring will be planted with a wide and tasty array of heirloom vegetables. Many of you are probably thinking: "What's the big deal? Sounds to me like a description of a farm." But that's only because our childhood vision of a quack-quack here and a moo-moo there dies hard; the modern consumer has been carefully shielded from the true image of what the places where their food is produced actually look like. The Iowa of today, for instance, is consumed by corn. One crop, one vast acreage, one big conglomerizing agribusiness concern. Farms in California grow hundreds of acres of bland, identical, difficult to bruise tomatoes engineered to arrive in your supermarket intact and flavorless, twelve months out of the year. Like the old colonies, disastrously monocropped with exactly one export, like Cuban sugar, Honduran bananas, or Bahian cacao, American agriculture has in recent decades headed inexorably down the path indicated by profits and the economies of scale necessary to maintain them. Diversity today means having more than one genetically modified strain of corn planted on your land, not the Old MacDonald paradigm of dozens of different tasty animals gabbling about together beside beds of all sorts of vegetables, herbs and fruits ripening in the same bed. 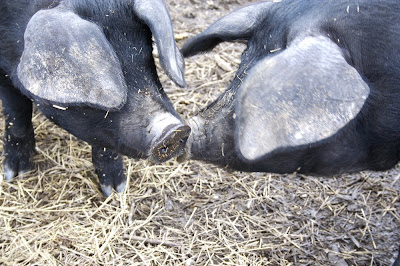 Alejandro, inspired, in large part, he told me, by reading Michael Pollan's The Omnivore's Dilemma,

about which I have previously written, abandoned Brooklyn with his affianced, Chase, to head for the hills. Soon his emails were full of stories of assisting at difficult calvings and receiving payment in meat for his participation in slaughtering a cow. This isn't about vegetarianism, organics, or even really opting out of the rat race. Call it a culinary lifestyle experiment, essentially based on the logic that life will be better and more healthy if you are in a position to supervise and participate in the birthing, growing, killing, nurturing, harvesting and preparation of your own diet. 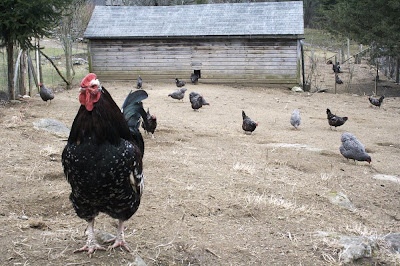 Lord of the Harem, master of all in his domain 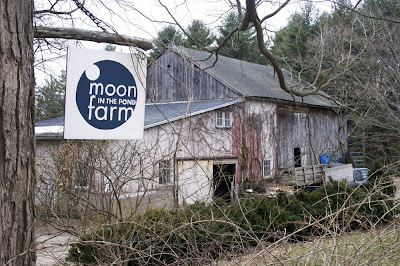 At the Moon in the Pond Farm we were welcomed by Dominic the farmer and urged to take an entirely unsupervised stroll around the property, a patchwork of fields and forest. Contrast this hospitality and conscious transparency with the categorical stonewalling of those public relations specialists who routinely deny the media access to factory farms, and actually refused to let Michael Pollan's observe the slaughtering of his own cow, a head of beef he owned fair and square, having purchased it as a calf. Dominic uses a highly flexible and portable lattice of solar-powered electrical fences to rotate his animals--cattle, goats, pigs, chickens, sheep--through the land, depositing nutrients, clearing brush and clipping the grass so it constantly rejuvenates. Liking the look of the animals and their obvious contentment in their happy surroundings, I loaded up a cooler with goat, lamb and beef stew meat, a goat shoulder and some home-made chorizo. Dominic has an enormous new walk-in freezer and very reasonable prices for meats raised with so much care and love. 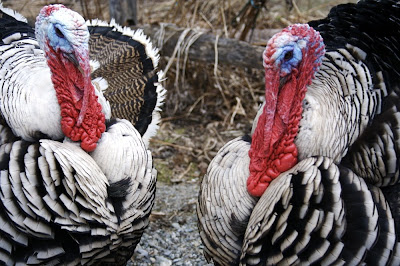 If they look this regal and healthy, you can bet they will taste delicious. These beauties were guarding the farmhouse at the North Plain Farm, where the animals literally seemed to be running the show. Talk about free range! The yard was awash with inquisitive, pecking chickens, and pigs rooted for lost kernels of grain in the mud just beside the driveway. Much of the meat produced here goes to the most discerning New York chefs, cooks who really care what they are putting on the table. I can't afford to eat in those restaurants, but I could afford to buy my own chickens, which went into the cooler with the rest of my haul.

When paying for my meat at the Moon in the Pond Farm, I saw a strange banknote in the change jar, and asked what visitors, from what distant foreign land, had dropped off the unknown currency. It turned out to be a berkshare, the locally issued and accepted alternative to the no-longer-so-mighty Federally issued greenback. Local merchants, banks and farms can opt to accept these non-dollars, putting their money where their mouth is, as it were, in this literally local economy. The Berkshares feature local heroes, like DuBois, Melville and Rockwell. Given their uselessness in Brooklyn, I was forced to accept my change in dollars,but I felt sheepish about it. Promising to return with a list of orders from hungry Red Hookian neighbors, we rolled back down the Taconic towards the Big Apple.

Oh my, that food sounds delicious.
I just got back from the market here in Quetzaltenango, from which I hoped to buy a chicken. Having arrived late, though, I opted to wait till tomorrow before buying an animal carcass, as all the specimens this afternoon looked as if they were sitting out under the sun all day.
I did buy some eggs, though, and I'm curious if they are more similar to American supermarket eggs or those from the farmer's market.
Tomorrow: A whole chicken, quartered (for a pollo en mole dish I'm planning), fresh tortillas, and I'm hellbent on finding some chorizo, longiniza, or the the Guatemalan equivalent.
Bon appétit!

Nice material.
Know anyone who wants 3 credits at the New School studying this topic?