We are on the eve of our departure for the next leg of our Antarctic marathon. Tomorrow afternoon, weather permitting, Sylvestre and Anne and I will pack into a helicopter and fly over the frozen Ross Sea to the mainland to set up camp in a high mountain valley with four geologists from Fargo. They run, far too many people have told me, by far the most minimalist, sparse and rugged camp of any of the teams who head out into the field. We are taking with us only two tiny generators to recharge our sound and camera batteries, which we will run as infrequently as possible. The only devices we will have that generate heat are four standard Coleman stoves. 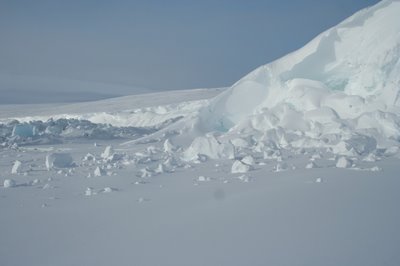 Perhaps because of the late-season persistence of the polar vortex, a swirling stratospheric typhoon of negative 80 degree air whirling about somewhere above us, temperatures this October have been fifteen degress colder than average. Subtract another ten to twelve degrees to account for the altitude at which we will camp and things are starting to sound quite chilly.

Most camps, far too many people have seen fit to mention to me, have diesel burning Preway Stoves and Jamesways, which are essentially quonset huts made from ballistic canvas. Some have wireless internet, a full-time cook and, for all I know, free massage therapy and spa treatments in the afternoons. We won't have any of that sort of absurd luxury. But the communications-challenged environment sadly means that there may be few, if any, new posts to antarcticiana over the next fifty-two days. I have been informed by Andrew Podoll that I may be able to get the occasional text-only entry up via satphone email. Failing that my man Deany is on standby to assist with some limited data flow, so don't give up us on altogether....