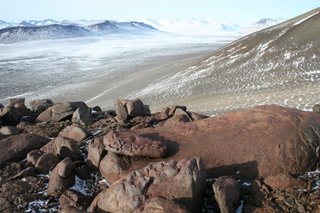 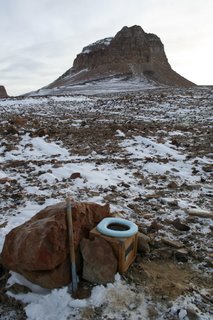 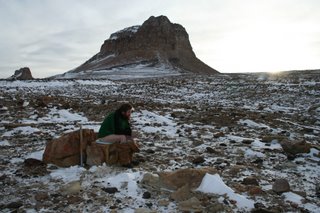 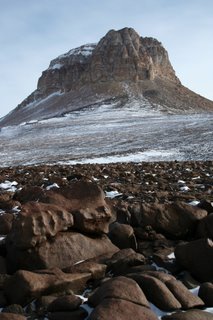 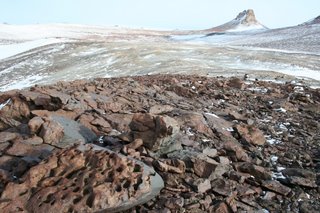 They got us pooping in barrels up here, my man. No terlet, nothin'. Happy to do it sitting on top of a plywood box or not, though, after forty-eight hours of total blockage. Runs in the family. Sorry to share that, but I've already realized a camping trip of this magnitude and extremity gets you all kinds of in touch with your bodily functions. Anyway, your cheeks get a bit cold, but the view from the box is spectacular. This is a totally dry camp we're running. We didn't bring any water in, and we aren't taking any out, and none goes on the ground, ever. All pee goes in the pee barrel. Spill your tea up here and it's like a glycol hemorrhage down in MacTown. Fly in the emergency tea-leaf removal squad, pronto.

What makes this little patch at the bottom of Mt. Boreas so geologically spectacular is that just behind a little glacial moraine up back of our camp lie the remnants of an ancient pond. Ancient, dude. Original, very old-school silt and sediment and layers of moss just lying out on the surface, or only inches below it. We're surrounded by undisturbed surfaces thirteen to fifteen million years old. The geologists we are with are scraping up thirteen million year old mosses from the lakebed. So we're trying to leave not so much as a moustache hair behind. I'm sure you agree it would be most embarrassing if in five hundred years or so some future generation of scientists were down here having a peek: "What you got?" "Oh, looks to me like some fourteen million year old single-celled organisms, fossilized, and some idiot's five hundred year old frozen earwax...."

I've had a cold, which is not much fun at twenty below, but the tents start to get liveable once you run a Coleman stove in them for awhile. You can't do that while you sleep, of course. Last night I lay down and wrote a fakesimile of Scott's final chronicles in my diary. "Sleepy, very, very sleepy,...time to... turn off the stove...." Even when awake one starts to feel a little oxygen deprived and loopy and has to remember to vent. Today I'm feeling much better and getting to that level of cold and lumpy cot-induced sleep deprivation where I know I will start to sleep well in my Scott tent.

Defrosted a couple of Speight's by dropping the frozen solid cans in a pot of boiling water. Left one just too long, only a few minutes, and therefore enjoyed hot beer with the feijoada dinner. (There would be a link here to some deep back-country Sao Paulo recipe, but I don't have the technology). I cooked kidney beans with Canadian bacon, Italian sweet sausage, and shredded peppered beef jerky and farofa-ed it off at the end with a box of cornmeal and it was about as good as if we had stopped on a Friday at a roadside cafe in the pantanal. So far it is pretty much iron-chef of the backcountry around here. Anne made pork loin with perfectly crisped rehydrated tomatoes and herbes de provence last night and I stepped up with the feijoada, shredding the chunks of jerky with such dedication that Sylvestre finally said "C'est un travail de moine, ce que tu fais la." (That's monk's work you're doing over there). He has to cook tomorrow and is pretty much running scared at this point. We're inviting one geologist over to dinner each night, from their tent all of twenty yards away, as a kind of getting to know you gesture (their idea, and a good one, they don't want to feel as if they are living amongst strangers). They generally cook stuff like pre-breaded deep fryable chicken patties and "chile con carne," so they are in awe of the culinary excesses going on over here at the writers and artists.

We're going to turn off the generator, get rid of the dieseling and go back to sublime, total, infinite and glorious silence (I am able to record usable dialog for film here from fifty yards, something unheard of almost anywhere else in the world). So that's all for now.