How about steamed, with a little butter and lemongrass...? 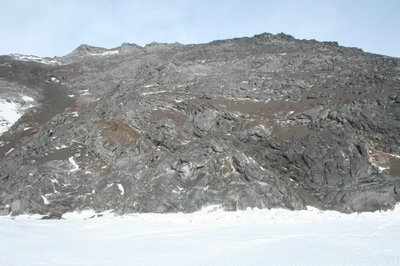 It's much steeper than it looks, that's why they call it Inaccessible Island


Yesterday, feeling we hadn't been out of McMurdo in an age, and then only in the middle of the night to groggily shoot landscapes, we decided to go fishing at the foot of Inaccessible Island. With a posse of three lady marine biologists and one dude, on skidoos and by Pisten Bully convoy, we headed out for the fishing holes. A Minnesotan friend of mine in college, a veteran ice-fisherman from the land of ten billion lakes, once spent an evening recounting to me the joys of winter fishing in Minnesota. The sport has all the rich cultural complexities and unassailable traditions that characterize all subcultures; in Minnesota the winter fish huts are dragged out into the middle of huge frozen lakes with Ford Pickups, and sit there for the entire season, complete with generators, television for the football games, wood stoves, Hudson Bay blankets and all the other conceivable comforts that make for endless pleasant afternoons of fishing. Namely beer. 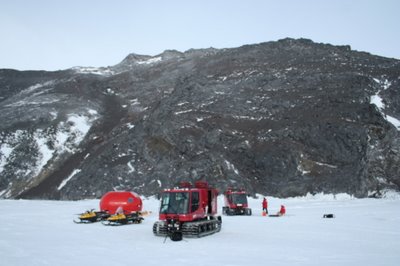 What time is kickoff?

There is no structural difference between Minnesotan ice fishing and Gretchen, Mackenzie, and Anne's approach to their scientific work; the only big contrast is in what they do with their catch. My college friend Tim swore that when the fish were biting on the Minnesotan ice he and his buddies would pull them out and slap them to the sides and roof of the truck, where the fish would promptly freeze solid to the cold metal. Once the vehicle had been converted into a sort of frozen fish sculpture they would then drive to McDonald's and go through the drive-through to try and freak out the burger jockeys. Instead our friends the marine biologists do everything possible to keep their catch alive, rushing them into a cooler of sea water the moment they pull them up, to avoid the fish freezing. The water underneath the sea ice maintains an almost constant temperature year-round of negative 2 degrees C, and the fish they catch are extremely intolerant of variations in temperature. They are interesting in part because a sort of natural anti-freeze flows through their veins. 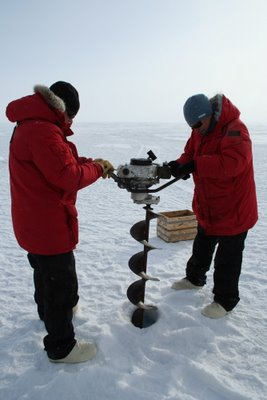 It's never too early to schedule your mandatory ice probe... 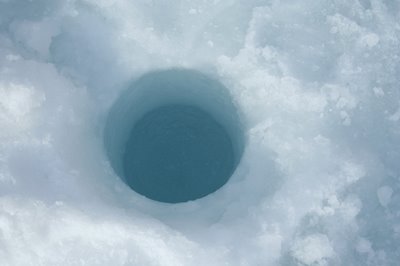 It was delightful to watch these scientists, as competitive in their fishing as any beer-swilling Minnesotans could be, dropping their neon glow-worm lures down freshly-drilled holes off the ends of absurdly short fishing poles--ordered, of course, from a speciality fishing rod outfit in Minnesota. In a couple of hours they pulled out some 35 fish, which are now to be found swimming in tanks on the lowest level of the Crary lab. The moment Anne pulled up a fish Mackenzie would seize her own rod and announce "I'm going in," taking over the hole for her turn. 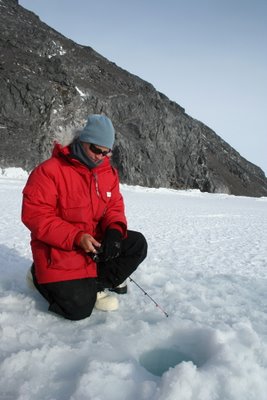 That's a cute little pole you got there, darlin' 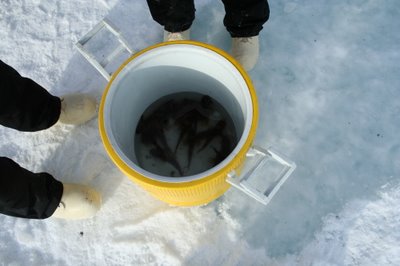 Mmmm, another day done. Time to pop 'em in the skillet!