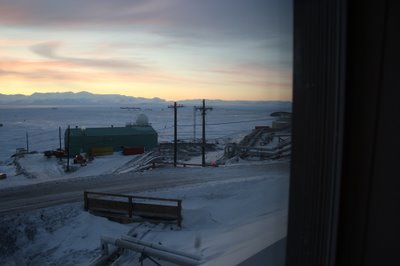 Today we are absorbed with the mundane task of moving offices. An enormous many-tentacled science project with a staff of fifty requires the entire wing of Crary in which we were previously stationed. It goes by the ominous, cult-like name of Andrill, as in "this whole wing of the building will be Andrill," or "he's with Andrill," and "more of Andrill will be arriving on the next flight," etc. I haven't met anyone who knows really what Andrill is, or what Andrill does, and the ones who are Andrill don't know us and still act like city people and don't say hello, as if, as Anne puts it, one is on an elevator in New York. "Greetings, fellow Antarctican!" I say brightly and cheerily as I pass the unfamiliar faces one finds roaming the halls of Crary lab these days. But with little response. Oh, it must be Andrill. (Okay, I admit it, I'm bitter. I liked the views

from our office window, and now we have none. I'm lashing out as I slide down the totem pole. One of them even smiled at me.)

Therefore, sadly, there will be no more views of the telephone poles outside our office. Because it is no longer our office. It belongs to Andrill. 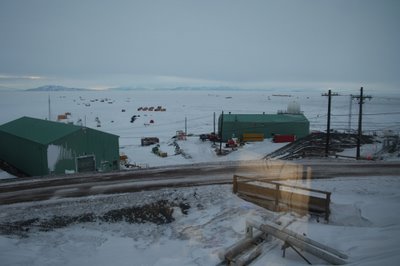 Slide down the totem pole? Pugh. Some gratitude please towards the wonderful, even though windowless, cubicle I got the privilige of calling my second home away from home for almost 8 weeks. I hope you will enjoy it...I'm keeping an ear on you :)
Wiesje

Richard, it should come as no surprise that "Andrill Antarctica" is an Anagram for "rat and clinical rat"

These geeked out scientists are all bookish, socially retarded, self-absorbed jerky, jerks.

Don't say I didn't warn you.

Then again "Richard "le" Flan" is an anagram for "Drill France, Ha" and I don't know what that means.