I've been a bit obsessed with the "winter journey" since I read Apsley Cherry-Garrard's account of it. It was, after all, the closest thing to a bird-watching expedition I have yet found described in the Antarctic literature. The modus operandi of the early polar expeditions was to arrive by ship in the Ross Sea in middle to late summer, once the ice had broken up enough to permit passage. After setting up camp, slaughtering some seals for meat and blubber, and trekking south to deposit advance depots for the feeding and heating of future sorties, expeditions then hunkered down for the winter. The goal over the long dark months was simply to avoid death by cold, boredom, starvation or lack of light and women. Travel was not seriously considered. It scarcely is today. Often the darkness and the weather were such that even to go outside was difficult and dangerous; Condition One in today's McMurdo terminology. But as Harry King, editor of South Pole Odyssey: Selections from the Antarctic Diaries of Edward Wilson, put it "this birdsnesting expedition was as close to Wilson's heart as the Pole was to Scott's, and it is almost certain that Wilson had made its realization a precondition of his accompanying Scott on this second trip south." 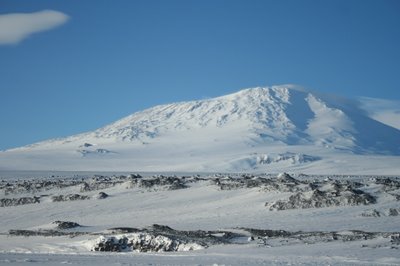 Erebus, en route to Cape Evans, in finer weather than that experienced by Wilson, Cherry-Garrard, and Bowers

"The Winter Journey," after which Cherry-Garrard named his book The Worst Journey in the World

, was a trip taken by Wilson, Cherry-Garrard and "Birdie" Bowers from Scott's winter camp at Cape Evans to the Emperor Penguin rookeries at Cape Crozier during June and July of 1911, in the dead of Antarctic winter. Wilson, biologist and doctor to Scott's party on both the Discovery expedition and the fatal polar expedition a few years later, was desperate to collect the eggs of the Emperor, and considered that the study of penguin embryos would be invaluable to the advancement of our understanding of biology. Cherry-Garrard was Wilson's protege, an excellent sledger, and Bowers was an indomitable titan of a man, said to have been almost impervious to cold. Their route would take them all the way around Ross Island; sixty miles of man-hauled sledging over horrific, crevassed and sastrugied sea-ice. Here at McMurdo, Cape Evans is to the north of us, and Cape Crozier far to the east across the permanent ice shelf; the route of the winter journey passed directly around Hut Point, where the three had lunch on their second day out.

The men pulled 253 lbs worth of supplies each, on two nine foot sledges. They were equipped for a six week expedition. It was nasty and dark and cold from the very beginning and it went from horrid to horror. "The temperature was -47 F., and I was a fool to take my hands out of my mitts to haul on the ropes to bring the sledges up. I started away from the Barrier edge with all ten fingers frostbitten," writes Cherry-Garrard on the second day out. "The temperature remained at -50 F all day, and we felt the cold a good bit in our feet on the march, Cherry getting his big toes frost bitten and I my heel and the sole of one foot. A good many of Cherry's fingertips also went last night and are blistered this morning...." This from Wilson's understated account

. When reading "felt the cold a good bit in our feet," keep in mind that much less serious frostbite injuries in the McMurdo of today generally result in the victim being evacuated on the next available flight off the continent. In fact, Wilson's diary so relentlessly downplays their difficulties that it can hardly be said to be the most exciting read of the polar pantheon. For facts and figures and concise descriptions it is an excellent source, but Wilson was much more a wonderful artist, sketcher and scientist than he makes a thrilling read. When it comes to physical hardships the group experienced, one needs recognize Wilson's solid and unflinching comittment to understatement. 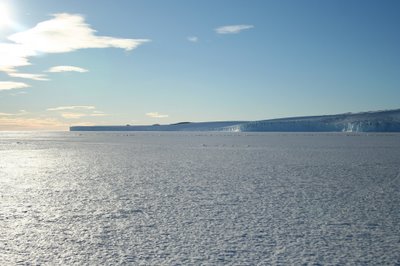 In the distance, the Barne Glacier, at the turnoff to Scott's last hut at Cape Evans

On this torturous nocturnal expedition things went from bad to worse. On July 15th the party finally arrived on a ridge above the penguin colony and decided to set up camp there, rather than at an Adelie colony five miles away: "In the Adelie Penguin rookery we should have been sheltered from blizzards, but here we should be right in their track -- only five miles nearer our work." Having taken longer than expected to arrive, in part because of fierce blizzards, they now opted to save time by camping in a location dangerously exposed location in the event of more blizzards. Storms were not long in coming. The three men build a hut of stone and slabs of frozen snow, and then lay in their sleeping bags on the floor of it for 24 hours, roofless, becoming drifted into a snowbank, because the winds were blowing too hard for them to install their canvas tarpaulin over the top. 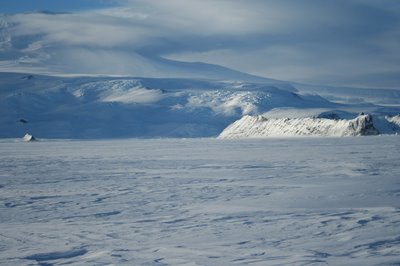 In the dim twilight of the next fine midday they attempted to descend to the Emperor Penguins, in part because they were already running low on oil, and needed the blubber for cooking and heat. Lost in the ice pressure they managed no more than to descend into a sort of ice-canyon, from which they could hear the Penguins calling above them. "It was quite exciting work," writes Wilson, " but it grew very much more exciting as the light got worse and worse. All round us was a chaotic mass of tumbled blocks of ice with crevasses everywhere either gaping wide or else bridged with snow drift. We tried one opening after another and found them all impossible until at last we were faced by a small mountain of ice blocks shutting off any further progress and about 60 feet high all round us, we being in a drift-filled valley at the bottom." The next day they in fact managed to collect five precious Emperor Penguin eggs, which is when, perhaps out of some sort of divine Penguin retribution, their troubles really began in earnest....