And you thought it was crazy in Antarctica...

Just heard from my friend M... in Zimbabwe. When I visited about ten years ago the two of us had an incredible safari in Mana Pools National Park, sitting next to the Zambezi River eating biltong and Ramen noodles and watching wildlife for days. Shortly thereafter the crap totally hit the ventilator, but M... still manages to live there somehow.

A little slow on the net here. Just waiting for govt to pass the interception bill so they can read anyone’s mail. Was wondering if you were freezing your ass off or hanging from crumbling ice flows.
Still in Zim and if we had fewer power cuts and more fuel I would be able to make a more substantial contribution to the destruction of the ozone!
Its as loopy as ever here. Just had the Zimbabwe International Film Festival! The digital technology workshop would have been interesting if it hadn't been for the simultaneous defence force re-enactment of a helicopter battle. It was the Harare agricultural show but the only thing they had to show was a military display. Inflation running at about 1300% and the Reserve Bank just chopped 3 noughts off the currency. So whilst people were bringing in their old money to change – which you couldn’t as they hadn't printed enough or if you didn’t have a bank account you couldn’t change your money! – they then introduced a law saying it was illegal to carry more than a 100 million on you. (Black market rate 700,000 to the US$) So road blocks everywhere as the police proceeded to help themselves to mostly poor people and traders “illegal” cash as they attempted to get to the bank before it all got stolen. Now we have 1 dollar and 1 cent notes which they cant print enough of so there is never any change and they have managed to make the 10000 look like the 1000..well the numerically challenged like moi finds it difficult. Plus the 1 cent has a minus value as the paper it is printed on is worth more. And now the Minister of Finance who is fighting with the Governor of the Reserve Bank has said the 3 noughts will be back by Christmas. The governor, bless him, is now building a new home. A simple 40 room mansion, with a guest lodge, 5 swimming pools, a gym and a cinema. Not forgetting the helipad.
Just had a week in Mana..in a lodge! Did have to throw my chair at a hyena that came too close to my boervoors. One tourist was trampled to death by a mother elephant. Saw lion and wild dog. Went on game walks and lion tracking walks.A must on your next visit. And canoeing. My first and last time paddling upstream in a broken national parks canoe through endless pods of hippos and huge crocodiles. Happily I had the guide with the A-K. Some campers now have solar powered electric fences around their tents and cooler boxes to protect them from the monkeys and baboons. A matter of time before that doesn’t work.

M... included this photo as a reminder of places that have birds, and grass, and bamboo. 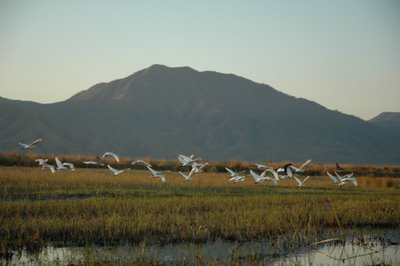 Thanks for the update and stay safe; we're thinking about you!