We're going to be inside for most of the day interviewing McMurdoites about what brought them down here to iceville. We've set up an interview booth in the rock polishing room down the hall. Matt O promptly made a label for the door, which now reads "Interrogation Room." Since in the context of my sound recording career recording some sit down interviews against a plain backdrop makes for rather an adventure-free, sameish day, it may be a good time to give a quick technical rundown on how we are doing the shoot. I've had some requests for an outline of how things are working out in the extreme cold from other filmmakers, but the rest of you may find this dull. In fact, you may be bored to death. Should you actually expire from boredom, please remember me in your will; I'm a non-union freelancer and have no retirement plan to speak of.

So far our biggest problem has been the demise of one of our Canon cameras. We had two XLH1s but camera "B" has already bitten the dust. This apparently had absolutely nothing to do with the cold, but resulted from the extreme dryness here, which results in the generation of enormous amounts of static electricity. We pad about the carpeted floors of the Crary labs in our 100% wool long underwear and it is no surprise that we are constantly zapping ourselves on doorknobs and metal shelves. One of these zaps seems to have fried a board on the Canon.

Otherwise the most significant issue comes from changing environments; bringing a camera in from the cold results in immediate lens fog. It can take a good half an hour or forty-five minutes for the condensation to diminish. To combat this we are exclusively using a Sony F900 HD camera outdoors and using the Canons inside. Taking the Sony out of doors is never a problem, but once we come back in it has to sit and sweat until it gets back to indoor temperatures. If your rush right back outside the condensate freezes to the lens, and, presumably, the heads and everything else.

Unfortunately I don't have the luxury of building up two complete sound packages, so I have to put up with the condensation. I don't have a foggy lens I have to look through, but on coming in from the cold my Sound Devices 442 mixer and Sound Devices 744T hard disc recorder immediately get a covering of hoar frost on them, which then melts as the devices warm up, leaving the electronics sweaty and moist. So far this hasn't resulted in any catastrophes but I imagine some of the potential problems could be cumulative, so I try to avoid this whenever possible, by leaving the gear in a colder indoor corner when I come in, for instance. 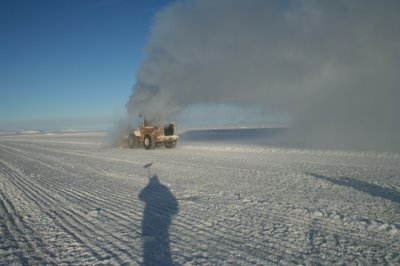 We have porta-brace polar bags for the camera and my sound package which are meant to hold in some of the heat the machines generate. The sound gear gets mighty cold, but probably remains some degrees warmer than the outdoor ambient temperature. The 744T records on a spinning hard disc and also on Compact Flash cards, which are said to work better at extreme low temperatures because they require no moving parts. So far I haven't had any issues with the hard disc but from the first day I have always fired it and the mixer up indoors so that it goes out into the cold already spinning the disc. We are recording double-system with 29.97 non drop free run time of day SMPTE time code and rejamming the camera to the 744T every time we change batteries. (I know, I lost some of you just then). This alleviates my paranoia about the wireless link between me and Sylvestre; often I can't even see inside the sound bag to reassure myself that my wireless transmitter is functioning properly. Yesterday on the ice runway we went through about 3 Lithium 9 Volt batteries in two hours; indoors they would last for at least 8 hours each. Generally I have had good results extending battery life by packing the transmitter's pouch with disposable iron-filing-based Grabber MyCoal Heat Treat Hand Warmers, but yesterday nothing seemed to be working and it wasn't exceptionally cold, so I'm a bit confused.

Except for wireless transmitters we are exclusively using the Anton Bauer Dionic 90 battery for all cameras and sound equipment. I had two Anton Bauer "gold mounts" wired to gutted Hawk Woods boxes by the Professional Sound Co. in New York so that I can power the whole mess from these incredible batteries. Sylvestre put some in a freezer at -30 for a few days in Montreal, took them out, and found they had only lost about 5% of their charge, possibly not much more than they would have lost in three days of sitting around at room temperature. They are rechargeable Lithium Ions and so far have performed fabulously; I only change the one battery it takes to power all my stuff about once every two days. This is going to really help us when we are in the field camp as we will only very occasionally have to run a diesel generator to power the battery chargers.

Whether the rest of our fiddly little things will continue to work when we are camped out and the equipment never really has a chance to get warm is still an open question.

I'm still impressed that the extreme weather hasn't killed the gear. Or that they haven't thought of Extreme Weather eqipment to help combat some of the problems you've been encountering.

The whole experience is so awe inspiring. I can't begin to imagine what it would be like down there, but your images and words are helping to paint a very beautiful picture.

I'm almost anxious to see this documentary and see all the places and people you've mentioned.

And yeah, you did lose me a little bit when you started in on the jargon, but I pretended like I understood so you couldn't tell I was mostly completely baffled. :)