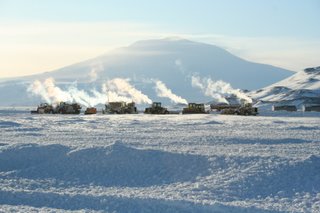 A dozen massive vehicles by Caterpillar, dieseling while their drivers catch lunch. Don't they know I'm trying to record sound over here? Meanwhile Mt. Erebus attempts to out-diesel them in the background.

We spent today on the "Sea Ice Runway," which is under construction in anticipation of the fast approaching summer. Known here as "mainbody," summer officially starts with the arrival of the first flight on October 3rd. Everyone commenting on this says we are really lucky to be here for winfly because mainbody is hectic, there are lines for food at the cafeteria, and the place is just generally overrun with mooks and beakers. In other words we have already become a junior league version of the winterovers, who groused and sulked when our flight arrived and they were forced to endure us running about gabbling and oohing and aahing, healthy, fresh-faced and suntanned. Still three weeks away, we already resent the imminent arrival of a bunch of johnny-come-latelies who are, we're sure, certain to be intolerable and disgustingly enthusiastic about something or other when, for God's sake, they don't even know what darkness is. 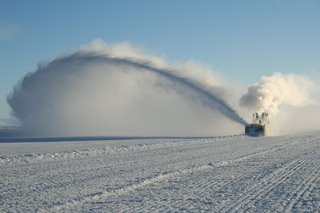 Could you hold on a second? I think I lost a contact lens...

The Sea Ice Runway is a hive of activity. Graders, snowblowers, and surveyors are making it safe for planes to land on the six-foot thick ice. Once it is up and running, or open for landing, airplanes will be flopping down just a few hundred meters from our office window, so while I've been complaining that we have yet to film a shot without some kind of motor dieseling somewhere in the background, I suppose I should count my blessings, as I have only jet engines to look forward to. It has been blissful so far, since not a single aircraft of any variety has ever passed overhead, but apparently there will be over 300 flights in the course of the coming season. This seems a staggering number in support of a few science projects, but as I learned on board the USS Nimitz last fall, military pilots don't log any flight hours by sitting on the ground. The runway preparation machinery is awesome, and includes many future contenders for the Vehicles of McMurdo photo essay, with snowblowers that on my sidewalk on Coffey Street, would probably suck up, chew, and spit out my entire termite-ridden shack of a house along with the snow. Comparing them to your average snowblower is rather like comparing Niagara Falls to a garden hose; these blowers fling grapefruit and basketball sized chunks of solid ice dozens of yards. Before driving out there we were told that last year a pickup truck was largely destroyed and its driver gravely injured when he made the mistake of turning along the runway towards the business end of one of these beasts. 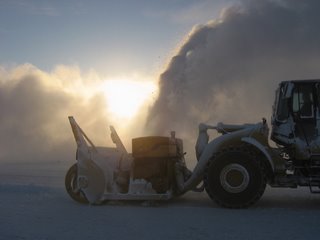