Reading: The Worst Journey in the World

Very nearly one hundred years ago R.F. Scott, E.A. Wilson and "Birdie" Bowers starved and then froze to death in their tent, on the "Great Barrier," permanent ice shelf on the way back from the South Pole. In "The Worst Journey in the World" Apsley Cherry-Garrard recounts the build-up to this catastrophe, drawing on Wilson's and Scott's diaries and letters to illustrate their suffering right down to the very bitter end. Although it is an exhaustive and well-written account, I had never quite grasped how it could be that the threesome, only some 11 miles shy of their next carefully layed depot of food, could have spent day after day in their pitched tent, waiting for a blizzard to pass before continuing along, all the while knowing they were at the point of death. Why, even in nasty weather, did they not continue and make a final attempt to reach the depot? I now understand.

After the long day yesterday, with eleven of us lounging in the single combination living room and kitchen, stuffing ourselves, snoozing, and reading, we enjoyed a communal DVD screening of "The World's Fastest Indian", a cute but forgettable New Zealand road movie in which Anthony Hopkins spends his life savings to travel to the United States and race his motorcycle at the Bonneville Salt Flats. Mike, one of the riggers, split his attention evenly between the film and the real-time wind speed readout feeding to the laptop by the telephone and VHF radio. He tells me there is a word in English for "going crazy from the wind," which I haven't googled yet, but put it in the comments if you know what it is. 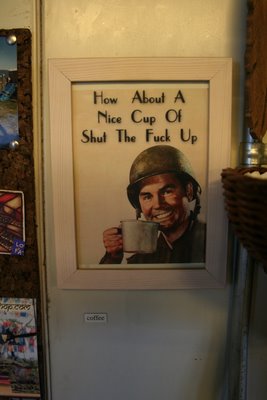 The kitchen at Black Island is full of homey little touches to make you feel comfortable and help ease the difficult transition you may experience after arriving on a new continent.
Photo: courtesy of The Black Island Heritage Preservation Trust

There are three levels of weather here: Condition 3 is "normal" and in it prudent and standard outdoor activity is authorized. Condition 2 is defined by wind speeds between 45 and 55 knots, or temperatures below -75 C or visibility of less than one quarter mile. In Condition 2 nobody should leave central McMurdo base (or, in our case, the immediate environs of Black Island). People not in a building should immediately go to one. In Condition 1, defined by wind speeds greater than 55 knots, or temperatures below -100 C, or visibility less than 100 feet. 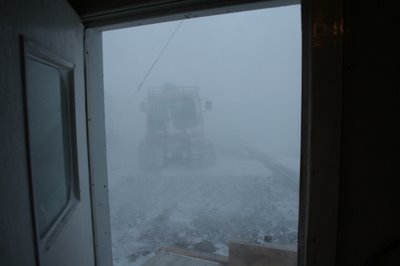 Parked Bully in horizontal snow, about fifteen feet outside the door.

As we watched the film, and Mike watched the wind speed, it became pretty clear that even if nobody was announcing it (all eleven of us currently at Black Island were in the room watching the movie) we were technically in Condition 1. Under Condition 1 nothing moves. At McMurdo, you must remain wherever you find yourself when the Condition is announced. Were we to follow the law to the letter, the six of us sleeping down in the "Night Train" would instead need to curl up on the sofa together, or spread sleeping mats in the battery room. At the end of the film I checked the wind: 63mph, or exactly 55 knots, the cutoff between Condition 1 and 2. Moments later, a lull. The computer had the windspeed at 38mph. But by the time I got on Big Red and my neck gaiter, mittens and boots, the wind was once again ripping. I opted not to check the readout again, turned on my headlamp, and headed for the night train, seventy-five yards away. I took blowing snow full in the face at some 50 knots and stumbled towards the two parked Pisten Bullies some ten yards from the door. "Telephone" Keith kept an eye on me from the door. "I'll just sort of watch how you get along," he said. This morning he told me that as soon as I had passed the Pisten Bullies I was gone from sight. On the ground I could see some duct-work that I knew led about a third of the way down the hill to the Night Train, and marked the direction of the course. Reaching the end of it, I looked up. I thought I could see a building in front of me, but I wasn't sure. I was nearly blown over. I had little idea where I was going in the driving snow. Finally a broad pale shape loomed up in front of me and I pulled myself directly into the wind up onto the stairs. The door of the Night Train is an old, heavy, walk-in freezer door, and it opens out. I could barely open it, as the wind was pressing it closed, but I had managed the 75 yard traverse. I tugged the door open, slipped through, and let the wind slam it decisively behind me. That Scott, Bowers, and Wilson had remained lying in their bags, getting hungrier, colder and weaker, edging closer and closer to death, rather than pack up and attempt to continue the 8, or 11, or more, or less infinite miles onward to their next depot, through the blizzard, now made sense to me.

After a beautiful day today the wind is coming up again this evening, so we will see if we actually manage to get out of here tomorrow. 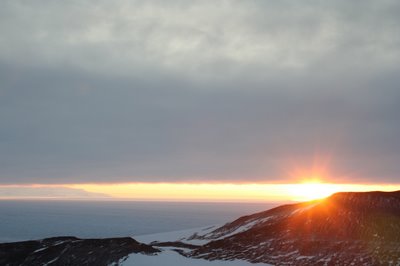 Comparative weather report:
Belfast, Ireland. Sunny, temperature
hovering at 70 F.
Glad to know you have a competitive edge with Condition 1 to 2 --so far.
Plse keep it that way.

regarding the "shut the fuck up" picture, I found this interesting: