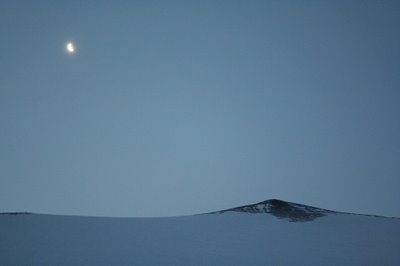 The solar tide is turning. We arrived in midday twilight; now, just more than a month later, it is nine or even ten o'clock at night before it gets as dark. This means of course, in the way that these things inevitably go on film shoots, that only days ago we realized that our film was dreadfully lacking in all things nocturnal. So we have rushed into night mode, staying up later and later to film in an ever-narrower midnight patch of obscurity.

Last night we ventured out to the ice runway, where the night shift of snow-blowers and bulldozers was toiling away to open the apron. Here the first flight, on October 3rd, will disgorge its fresh Antarctic passengers, refuel, and then turn and taxi before taking off to fly back to Christchurch. One can only hope that it will also unload many fresh vegetables.

We parked on the runway, facing south in the dim blue gloom. Across the plowed and blown ice before us, captured in the headlights, was an unbroken white sheet of drifting snow in constant motion, flowing along the surface, so that we appeared to be a ship moored in a wide river of translucent, rippling milk. To our left over the darkness of the apron roamed a dozen enormous Caterpillar tractors, dozers and snowblowers, like gigantic aimless lightning bugs. Entirely invisible save for their massive headlights, they crossed back and forth in a circular choreography of diesel testosterone. Endlessly they pushed the snow from one place to another, an absurd Sisyphean ballet about waiting for the next storm to bring more labor.

Tonite we sought the diesel-free wilderness, venturing out along the permanent ice shelf, where Ross Island meets that part of its sea that has remained unthawed for thousands of years. I had, for the first time, the opportunity to record silence, a topic that has been of some debate between Anne and myself. (I am a sound recordist, I told her, not a silence recordist). And so, with the pots controlling my stereo microphone turned all the way up, standing still as a stone, the mic pointed over the white void towards the south pole, I recorded. Nothingness. Not a light glimmering on the meters. My stomach gurgled and I wondered if I had heard the sound through the headphones or internally, within my body. Far away the ice creaked, but not even this registered the merest blip on the digital meters of the portable mixer I use. 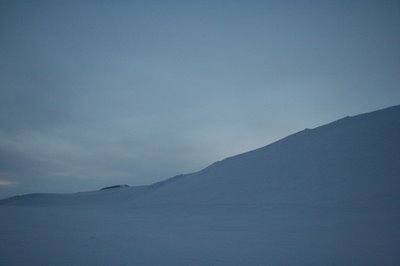 Because we have had occasion to film once or twice a solitary soul wandering off across the ice, on a voyage of discovery or lost in an existential crisis, and because filming such wanderings requires the three of us, plus the subject, to crunch along like a herd of elephants marching across a field of styrofoam peanut packing foam, thereby rendering the synchronous sound unusable, we decided to take advantage of the silence to record isolated footsteps in the snow, in the hopes that they might help the editor later. I directed Sylvestre to walk purposefully towards a particularly perilous crevasse, and captured his crunchy stride for all eternity. There at the edge of the ice-shelf in the dim silent night, beneath a quarter of a moon, the three of us marched about, with no destination in mind, making crispy footfalls that echoed off the hillside behind us. Finally I burst out laughing. It was beyond surreal. "This is better than Beckett!" I shouted. 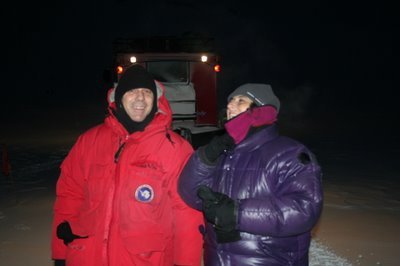 Email ThisBlogThis!Share to TwitterShare to FacebookShare to Pinterest
Labels: antarctica