Life in a windswept shack

Those disappointed by the creature comforts of the McMurdo station and the way of life it offers, one that might be called "bourgeois elementary school," with its hot lunches at prescribed times, its hallways postered with science projects and announcements of knitting circles, are people who feel strongly the disconnect between the hardships of the "golden age of exploration" and the insular and seemingly overprotective cocoon within which McMurdo envelops the contemporary Antarctic traveller.

Such people, of which I certainly am one, would do well to spend a night like last night in the "Night Train" at Black Island. Yes, last weekend we slept on the ice shelf on the coldest night of this year's Winfly, but just next door, in the adjacent tent, were Thai and Cece, mountaineers with twenty years of Himalayan, Andean, and Alaskan vertical ice climbing experience between them; their primary mandate for the evening was to be certain we didn't freeze, blow away or lose any fingers or toes. Although that was an exciting evening, it was instead last night, another sleepless night, that summoned for me the ghosts of the defunct greats of Antarctic exploration. 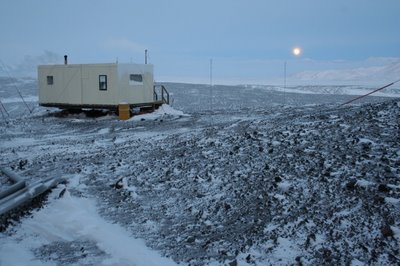 Is there a building inspector around here?

I've already noted that the Night Train was so named because sleeping in it resembles a night's rest aboard a moving train. But if two nights ago I was reminded of the plodding pace and relaxed swaying of an Eastern European wagon-lits, last night was more like being in an open cattle car pulled by the Japanese bullet train.

As the winds picked up to seventy and eighty miles per hour towards bedtime, Mike, Sylvestre and I bundled up and stumbled down the hill towards home. My snorkle hood restricted my vision to one eye, stung by the impact of driven crystals of snow. If this description recalls my last blog entry, you are begining to understand some of the character of life on Black Island. 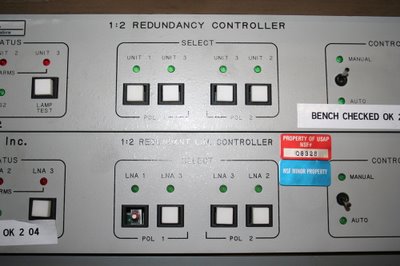 I'm not sure what this does, but it was on a shelf in the battery room at Black Island; I'm hoping it will come in handy and help me avoid hackneyed, repetitive descriptions of the searing, biting, icy, chilling, sweeping, blustering, driving and otherwise brisk wind.

Inside, the Night Train was freezing cold. Not because the preway stove had gone out, but because the Night Train is a leaky sieve of a plywood shack, and the relentless onslaught of the wind had scrubbed every corner free of warmth. In the sleeping bag, on the metal bunk, the sensation was of being suspended in a wind tunnel in a balsawood coffin. Aside from the morning there was nothing to wait for except the inevitable moment when our fiber-board tomb would take flight, sail down the hill and splinter on the sea ice, the shards blowing onwards across to McMurdo, due North twenty miles. The constant shaking and shuddering was like those tense first moments of an enormous aircraft vibrating its way towards take-off, except that the sensation lasted for ten hours.

My feeling, from having seen it from the outside, is that the Discovery hut is of much sturdier construction. They don't make them like that anymore. 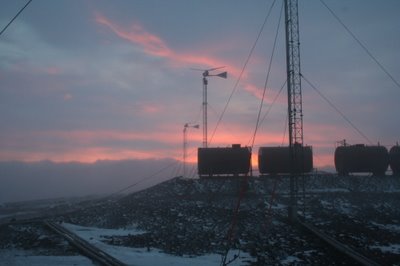 Not the Night Train: diesel tanks at sunset

in high school they made me read Scott's Last Expedition, luckily hand guns weren't as prevalent as they are now or i might have shot myself in the head. anyway, wondering what beach front property is going for down there?