This is Black Island Traverse, come in please...

Yesterday morning at about 9AM we set out across the permanent ice shelf in three Pisten Bullies, accompanied by T-Rex, a geriatric tank-like flatbed truck with treads instead of wheels. 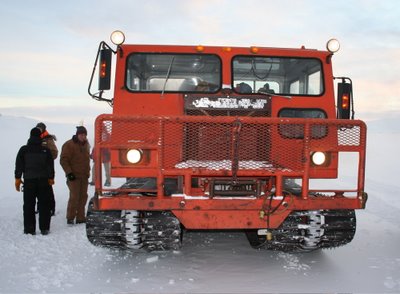 The Mighty T-Rex. from: Vehicles of McMurdo 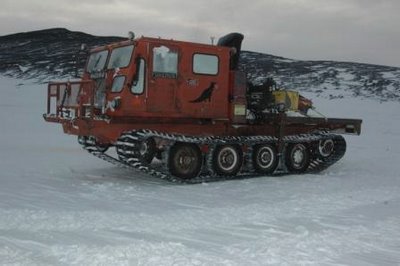 
I can tell you that Piston Bully 313, since I drove it for the five-hour trip, has a top speed of 14 miles per hour on flat ice. 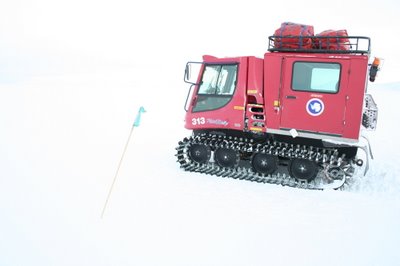 
We identified our convoy to MacOps (McMurdo Operations) as the "Black Island Traverse" and scheduled hourly check-ins. The Pisten Bullies were crammed with gear: Survival bags, with food, sleeping bags, tents, stoves, and first aid kits; our own sleep kits; food for four nights; tool kits "on T-Rex;" bags of ECW gear, GPS units and radios. 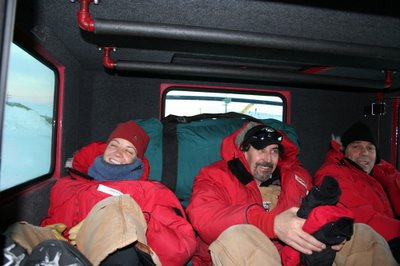 Dawn, Keith and Syl:
Dag, it's crowded in the back of this here Pisten Bully


The drive to Black Island is 56 miles on a roundabout route over the permanent ice shelf, but Black Island itself is only twenty miles as the crow flies from McMurdo station, across the sea-ice. "Sea-ice" defines that ice which normally melts every year and is at this time of year generally six to ten feet thick, while the "Permanent ice shelf" is thousands of feet thick and lasts "forever," at least until global warming really kicks in.

After waiting two days for the weather permitting, we have fabulous weather for the drive. The sun comes fully out, only to hover on the horizon all day, without ever moving up any further in the sky, and the Royal Society Mountain range is illuminated with a warm pink light. With the sun directly behind us, the Pisten Bully, spewing clouds of snow from its treads, makes a spectacular shadow on the snow in front of us. Imagine an enormous frog wearing a billowing wedding dress and you get an idea of the shadow which led us along the ice. Although a truly unique experience, I was reminded of driving through the Sahara, where one has no idea of the logic of the roadway; the fact that one is driving alongside regularly staked markings of bamboo instead of fifty yards to the right, or to the left, or a mile to the right, or to the left, seems not to matter (until one drives into a crevasse, hidden by drifting snow). The fine dust blowing off the vehicles and impeding visibility and the importance of maintaining the convoy also reminded me of the Algerian desert.

Four hours into the trip one of T-Rex's belts broke. A lattice of rubber plates held together with a spine of curved steel bars, it lay stretched out in the snow like an enormous snake skeleton. T-Rex looked far less military and rather tragically impotent with only one belt. Will and Dave, the boys from the heavy shop, used a Pisten Bully to wrangle the belt back into position, and Will backed T-Rex up and onto its own belt. We abandoned the scene, dividing into two groups, but learned later that after two and half hours of struggle in very cold conditions it was ultimately impossible to create enough slack to reconnect a shorter version of the belt. 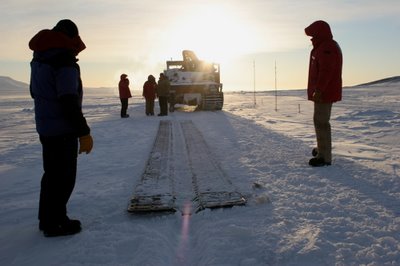 Will takes care of T-Rex like it is his own child, and he was not amused when Ants named this photo the "Self Laying Track Vehicle"
photo: Anthony "Ants" Powell

After arriving at Black Island we set to work shoveling snow out of the "Night Train," an eight man dormitory just down the hill from the main building, which is a combination of a kitchen, living room, food pantry, and rooms full of batteries and equipment for telecommunications and the storage of power from the windmills. Nobody had been to Black Island, or at least nobody had slept in the Night Train for the last three months, and it was full of snow in strange piles, on the sofa, on corners of mattresses, in a huge drift by the door. The snow here is so fine that like Saharan dust it works its way through even the tiniest holes. Even an invisible crack under the front door eventually allows in piles and piles of snow. Formations like stalactites hung from the ceiling in places where a tiny pinhole had allowed one granule at a time to enter. We removed many cubic yards of snow and then fired up the "preway," a diesel stove that soon had the place toasty, but dense with fog, like a sauna. 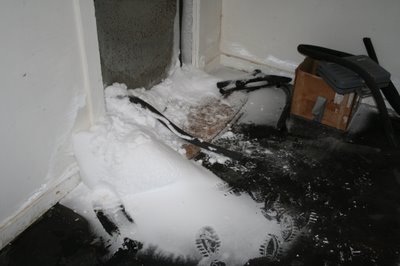 
After the arrival of the T-Rex party and fajitas and wine in the main building, we put on our Big Reds and made our way back down to the bunkroom, which is more or less a mobile home on stilts, with ancient, doubtless asbestos, floor tiles, and graffiti covering the walls with the wisdom of former visitors. i.e. "Australia is just like Black Island, except much, much, much, much better." In the course of the evening we came to understand why the bunkroom is called the Night Train. As the wind rose over the course of the night the entire building began to rock, creak, and whistle in the wind, as if we were in a couchette crossing eastern europe. By morning the laptop in the main living room giving constant windspeed readings indicated 40 knots, and by 2:30PM visibility was about 50 meters in horizontal blowing snow moving at 60-70 knots. No outdoor projects of any kind have been accomplished. We sit around the formica coffee table and read books, take turns on the computer and eat Dawn's chili, although beans and bunkhouse are universally declared a bad combination by the seasoned ice visitors. The wind direction holds firm out of 180 degrees due south, the source of all of Antarctica's nastiest weather. 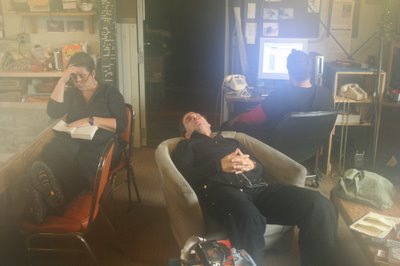 I recorded spectacular wind noises in the hall and especially inside Black Island's ping-pong ball, a fifty foot in diameter Buckminister Fuller geodesic shell for a massive parabolic transmitter, connected to the main building by a series of hallways and refigerator doors. I remember as a child we had a large sheet of aluminum in the basement that when shaken or beaten made thunderous noises with infinite and ominous theatrical applications. The inside of the ping pong ball in seventy knot winds sounded much the same as that aluminum sheet, but magnified tremendously in scale. The constant rippling and pulsing of the huge triangular panels, stretched taught over aluminum triangular lattices, created an amazing wall of sound. 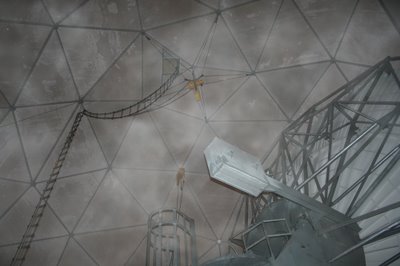 In the living room the wind rattles and sings mournfully in the chimney. Nonetheless the diesel stove heats the indoors to a sweltering 80 degrees F or so, which has a soporific effect on the room full of quiet readers. Only Will disappeared for the entire day, slaving over some beastly diesel engine or other, reemerging like a troglodyte from deep underground, slimy and coated with black grease, just in time to complain bitterly as he watched the rest of us gobbling the last crumbs from a pan of brownies. Otherwise only Dawn worked, cooking dinner and baking cookies. There is little to do but sit and snooze and eat, like a large family in a too-small vacation house sitting out a thunderstorm. 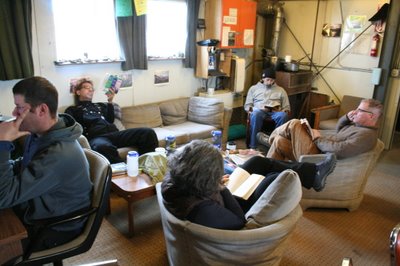 Happy to hear you all are safe. Hope your kidneys, liver and bowels are, too.

Does your friend want a beautiful photo of Duffel Bag Mary? If not, she should,
Phil

If Dawn was the only one working, then why don't I see any pictures of Will lounging around?

Will makes an excellent point in his comment, and I have therefore EDITED the post to better represent his reality...