I changed my mind, I want my records back

We certainly have no more concerns about being thought a bunch of pussies. Here at McMurdo, for the moment, we are halfway famous, as the insane people who went camping at the beginning of Winfly. 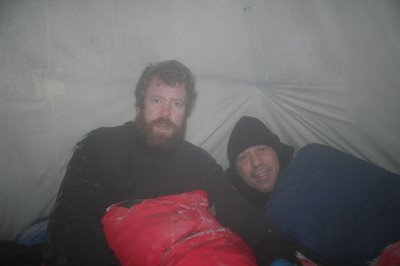 An icy awakening in the Scott tent: "Good morning, I'll have a tall latte, and some croissants."


According to Cece and Thai, who took us out on the permanent ice shelf to set up camp last night, this is the earliest in the season that "survival school" has ever been offered. Today at lunch, after we got back, complete strangers were coming up to me and saying things like "you sure chose a nice night for it," or "warming up yet?" and "glad to see you made it." Yesterday's temperatures were quite the most savage we have had since we arrived on the continent: by the time we went for an evening stroll to get our blood flowing before diving down into our sleeping bags, it was about forty below, the magical temperature that can be expressed in either F or C, since negative forty is where the two systems converge. In the late afternoon in a stiff wind from the southeast the wind chill was around -65 and was quite possibly worse out on the ice where we were setting up our Scott tents (some said "did you hear the windchill was down to minus 80 last night?" already expanding upon our legend). Cece and Thai have both guided mountaineering trips on Denali for years, met in Nepal and are the sorts of people who attack grizzly bears with their bare hands and dangle from ropes off the edges of glaciers and so forth, so we felt like we were in excellent company, but nobody remotely pretended to be warm. I had on three layers of long underwear, wool and then two layers of fleece, jeans, and insulated bib overalls. On top I was wearing about seventeen sweaters and "Big Red," as they refer to the monster parka which we were issued in Christchurch.
We drove out in a Pisten Bully and made camp on the ice. Getting the tents up was the major work for the day. These are similar to the tents Scott used; they are essentially tall, four-sided teepees with a large apron around the bottom. 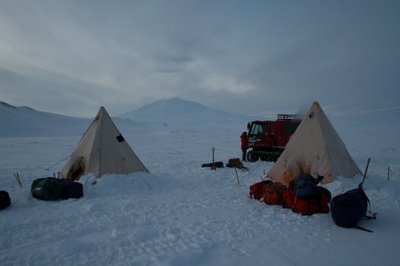 "Snow mound camp", with the volcano Mt. Erebus in the background.

This we secured by piling snow all atop it and burying tent stakes in the snow. This snow, sitting above thousands of feet of ice, reminded me of the old cliche that Eskimos have dozens of different words for snow, because it is completely unlike anything I've called snow before. It has the moistureless consistency and weight of blocks of styrofoam, and breaks up into crispy slabs when you shovel it. 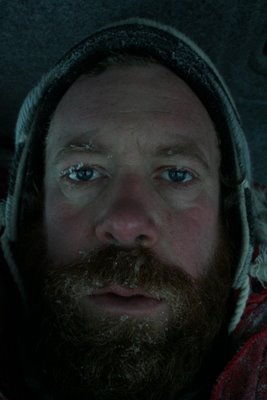 Hey, didn't I see you at the "Famous Polar Explorers" Costume Party?

Once I got in my bag for the night, sleeping in almost all of my clothes except the outermost layers, I actually kept pretty warm. In that kind of environment, however, I could do nothing but obsessively monitor every vagary in my energy output, anticipating a possible shortfall. When my beard froze up solid from the moisture generated by my exhaling I would pull Big Red over my face until I was claustrophobic and felt I was suffocating, and then I would peel back a tiny corner again to let some air flow in. With the three of us in the tent and mountains of gear it was beyond snug and every single action is difficult and requires violence. Sylvestre was wriggling around so much I was convinced his sleeping bag beside had been invaded by a horde of fire ants, but after forty-five minutes of tugging and thrashing I realized he was only trying to do up his zipper. I got no sleep to speak of, but my biggest problem was not the cold; I had unbelievable heartburn, the worst I think I have ever experienced, for which I can only blame the dehydrated "teriyaki chicken" in a bag that I ate for dinner. I'm rambling and desperately need a nap, but I'll add any exciting details later as they come to me.... 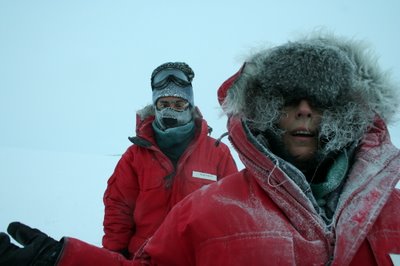 Anne's wondering if this whole thing was such a great idea after all.

Glad to see you that you still adhere to your life motto. Had it slipped your mind let me remind you that
Fun is Key

Recall the explorer named Scott?
He lusted for glory a lot.
His adventure began
with a dashing élan;
but its ending wasn’t so hot.